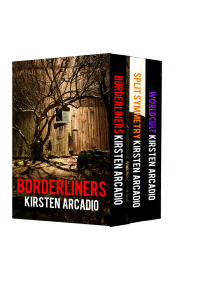 What if there was something in everybody that crossed the line between reality and imagination, something that spanned timelines and defied explanation?

Who gets to decide when this is a problem, when this stops a person functioning in the ‘real’ world, and what is the real world, anyway?

In the first book of the Borderliners Trilogy, Borderliners, I start small, examining these questions against the backdrop of an isolated and insular English village controlled by power-hungry cult leaders. In book #2, Split Symmetry, I move the same questions out of religious and small-town politics to a wider context of what is reality in scientific terms? What if this, too, wasn’t as we thought?

Finally, in the finale (book #3 out Christmas 2014), WorldCult, I pull all the questions from the first two books together in a race against time against the manifestation of a threat prophesied by Nostradamus five hundred years ago.