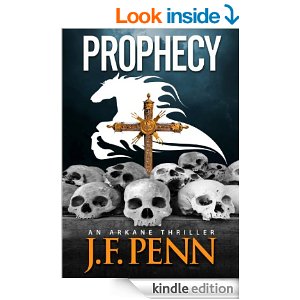 I’ve always been interested in what I felt were underground themes around religions and cults. So  I had something of an epiphany moment today when I logged onto Twitter and read through my usual feeds, one of which is made up of writers and publishing professionals. One of the most useful Twitter profiles I follow is @thecreativepenn aka Joanna Penn, a successful self-published author who has now become very much the authority on all things self-publishing.

At the same time, I’ve been agonising lots about my first novel, Borderliners, and the novels which will follow it.

In Borderliners I explore themes around religious beliefs and how people in religious organisations sometimes abuse power. I also look at mental ill health, the fine line between reality and illusion and how our perception may be the only constant. Where is the truth? Who are we, really? What if time isn’t linear? I feel there’s an overlap between what we believe to be ‘supernatural’ and the more acceptable notion of ‘metaphysical’, and this is something I like to mine. It’s very difficult to pull off, and I live in a constant state of anxiety that I may offend my readers’ beliefs (something I don’t want to do), or anger them. I’m also surprised how some readers get to the heart of what I’m exploring and others just don’t get it at all. I notice polarized reactions to my work, not just the novel which is published, but my following novel which is doing its third and final round of beta-readings. Probably, the same thing will happen with my third novel.

It came as a fantastic surprise to me, then, when I realised the person I had been following for self-publishing advice, is also author of novels with (on the face of it) some similar themes to mine. This probably should have been evident, but I was so busy lapping up all the publishing posts that I didn’t notice the actual content of her novels! Doh! Soon to be rectified, I downloaded two of them straight away. In the meantime, I looked back through her interview with Jen Blood (@JenBlood),author of the Erin Solomon mysteries, another series which examines themes of cults, religions and supernatural. I also then downloaded a couple of Jen’s novels too.

Here’s an excerpt, where Joanna and Jen talk about the tricky balance an author of such books must strike between respecting beliefs and exploring the themes which surround them:

So, how do your personal beliefs weave into your books, and how do you walk the line between respect of other people’s faiths and writing?

Jen: I think that for me, it really is, I have a fairly good idea of what I believe at this point, and it’s certainly not a traditional Christian model by any means. So, for me, it really has been something where my characters, I try to think of my characters as organically as possible, so just as I’m a person who’s shaped by my experiences, they’re people – even if they’re fictional people- who are shaped by their experiences. So, for example, Diggs is a hardcore atheist, he’s just that. And Erin is an agnostic, and she’s trying to figure out exactly how her early experiences gel with where she is now.

So, I kind of feel like at this point, it really is separate. Because I do believe that religion is such a personal thing for people: I feel very strongly that people need to sort out their own spirituality, and figure out where they come from and how that informs their life, basically. So I want readers to be able to do the same thing, where they don’t feel like my beliefs are being forced on them, and Erin and Diggs at the same time have their beliefs, and there’s no judgment or forcing of their views on other people. If that makes sense!

Joanna: It is a difficult line to walk, and I struggle all the time with it, and also wanting to respect everyone’s beliefs. But of course, it’s very difficult, because everyone has different things. But you have it doubly worse, I think, because you’re in America, and my one-star reviews are generally from religious Americans! Do you get any kind of nasty emails or reviews? How does that work?

Jen: You know, I’ve been really surprised, and I think that, I have actually consistently been surprised, because I consider myself a fairly liberal kind of person: I’m liberal, I’m definitely very liberal. So I’m often surprised that people who have – not a ton, but I definitely have conservative Christians who really enjoy the books, and I’m very grateful, and I love that they find something in there, and I’m really very pleased that I’ve been able to do this to the point where my views, apparently, haven’t colored things to the point where they’re like, “Well, I’m not reading that!” But, yes, I do occasionally get feedback from people, and it’s usually language.

Joanna: It’s amazing, I think I ritually slaughtered a child and then had a sex scene in a tomb surrounded by dead bodies, and then I get an email that says, “She said the f-word”!

Jen: I know: I’m always amazed by that, and we live in a different world, apparently, because I’m always stunned that people even notice that that’s used, and from the time that I wrote the first book, I’ve really kind of, that’s one of the final things that I do when I’m editing, is I go through and I search for the number of times that I’ve used the f-word, and I limit myself to like four!

Joanna: I limit myself to one!

Jen: Oh, OK! Well, I feel like Diggs would not be happy with just one, he wouldn’t be able to handle it.

Joanna: I even found myself censoring “Damn” – damn really isn’t a swearword, but I get comments about Damn. There’s an interesting thing there: self-censorship. My last book, Desecration, was very dark, and I wrote a lot of really kind of dark things, from my dark self. I did have to come up against: Should I really write this?

The full interview can be found on Joanna Penn’s website.

2 Responses to Cults, religion and mystery