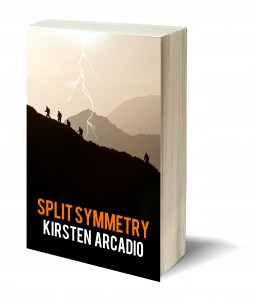 Set in the near future, Split Symmetry is the story of what happens when a hike in the notorious Gran Sasso mountain range in central Italy descends into chaos on the same night that scientists decide to work on a clandestine experiment in a lab beneath the mountain. Dr Elena Lewis must work around the clock to find members of her group who have become lost on the mountain, but just as she is close to finding them, the region is rocked by one of the worst earthquakes central Italy has ever known.

This multi-layered metaphysical adventure is the second instalment of the Borderliners trilogy, which can also be read as a stand-alone story.

Is this novel for you?

In beta-reading I found that readers most likely to love this novel tended to be eclectic in their tastes, but many of them told me they liked layered novels with twists such as Michel Faber’s ‘Under the Skin’, Murakami’s IQ84 and Audrey Niffenegger’s ‘The Time Traveler’s Wife’. Looking at other forms of media, it could also be suitable for fans of TV hit series’ Lost or Fringe. If you like these books and TV shows, then you might also like Split Symmetry.

If you download, read and like it, please consider leaving me a short review. If you’ve already got an advance copy and agreed to do a review, not is the time to leave it using the Amazon link most relevant to you above. Thank you!

When does multiverse speculation cross into fantasy? 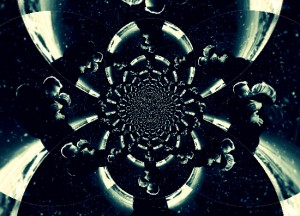 In this article in the New Scientist, the question is asked, Does the idea of parallel universes really describe reality?

inflationary cosmologists have opened the speculative throttle so fully that physicists now talk routinely of such things as an infinitude of parallel universes, or a “multiverse”. In the multiverse, every conceivable world exists, and individuals identical to you and I live out parallel lives in places we cannot have access to.

The article talks about a book by Max Tegmark, ‘In Our Mathematical Universe, which talks about seemingly outlandish theories of multiverses as ‘almost obvious and unavoidable’.

He sets out four types of parallel universe:

His first set, the Level I Multiverse, refers to an idea that many cosmologists already accept. Rapid early inflation would have created what Tegmark describes as “universe-sized parts of space so far away from us that light from them hasn’t had time to reach us”. These other domains – or “universes” – could well exist, although we currently have no observational evidence for them.

Tegmark’s Level II Multiverse refers to a bolder idea, championed by physicist Alexander Vilenkin and others. There may be other domains of space also created by inflation that are too far away to see. These will forever remain out of our reach because continuing inflation drives them from us faster than the speed of light. This idea refers to real, distinct, physical universes that cannot ever be observed.

At this point in the taxonomy, however, Tegmark leaves cosmology behind. In reading, I began to feel that his aim is to see parallel universes in as many places as he can. Enter the Level III Multiverse. This turns out to be a language for talking about the mathematics of quantum theory using the many worlds interpretation of that theory, first proposed by physicist Hugh Everett in the 1950s.

This interpretation describes all physical processes as part of an ongoing, perpetual branching of the universe into many other universes. It is indeed possible to interpret quantum theory this way, but readers should know that many other interpretations, equally in tune with observations, don’t invoke the idea of parallel universes at all.

Then there is the Level IV Multiverse. Again, this has nothing to do with cosmology, but is an ambitious thought about mathematics. Tegmark argues that reality isn’t simply described by mathematics, as most physicists readily accept, but that it is, in fact, mathematical.

Of course, the parallel universe glimpsed in Split Symmetry is pure fantasy…

One of the sources of inspiration for my novel, Borderliners, was the 1942 novel by Albert Camus, The Outsider (or The Stranger in some translations).

The alien feeling the novel evokes is very powerful. Camus himself said his protagonist

is condemned because he does not play the game.

My protagonist, Elena Lewis, is also an outsider. Having arrived in her isolated village eighteen months earlier to set herself up as a psychotherapist to the local community, she finds she is unable to integrate.

Having experienced this three times in my own life – once in a small town in the Home Counties when I was a child, once in Northern Germany during a sandwich year as a student and once more recently as an adult – I feel that some people are destined to be city dwellers, preferring the anonymous transience and comforting unity brought about by the idea of being an outsider in a wider community of outsiders. This, of course, makes you an insider of sorts.

But being a real outsider in a small community is no joke.

Elena’s character traits make it more difficult for her to integrate: she’s independent, self contained but also highly introspective and suffers bouts of depressive illness. The combination of these traits make it difficult for those on the inside to either understand or reach out to her. They think, she doesn’t need anyone.

All the lonely people

In a society where more than one in four of us lives in a singleton household and where those of who do live with family often remain isolated in other, more subtle ways, the idea of the outsider was an important one for me. Appearances are deceptive. More people are out the outside than we imagine. As philosopher Henry David Thoreau said,

‘The mass of men lead lives of quiet desperation.’

Elena doesn’t play the game either and quickly finds herself up against those who have the rest of the village dancing to their tune. Going against the grain carries punishment, sometimes subtle, sometimes harsh.

After trawling through the mire of paid promotions which are on offer to self-published authors, it struck me that some of the best of them are free. Goodreads springs to mind, although not everything is truly free (like the Goodreads Giveaway offer), most of the forums and connections available to you with readers  are free of charge. 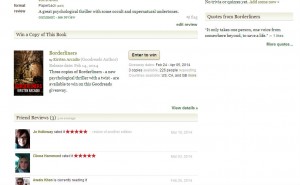 Well, maybe because Goodreads is all about connections. Rather than having books shoved at them, readers make their own connections with other readers and use their readers’ community to decide what might be a good read for them. Goodreads also has a great categorisation system. I discovered this recently when attempting to place my book in different genres on the site. This is not possible for an author to dictate, which is great.

No, rather like Netflix, the site uses meta data gathered from readers’ reviews, impressions and reviews of a book in order to decide which categories and genres it appears in. In other words, readers rule!

P.S. If you are interested in my Goodreads Giveaway for Borderliners, it is open until 5 April 2014.

Who joins a cult and why

At a recent party a friend and I were discussing the themes in my book, Borderliners. One topic in particular came up, that of handing over one’s advocacy to other people. My friend said she couldn’t understand why people did it but then we both remembered times in our lives when we had, in fact, almost done it ourselves. In my case, I was most susceptible to cult-like groups as a teenager (although never actually recruited). This is not surprising, considering ones teens are a time when many are looking for direction, often not from their parents or the people they grew up around. however, there are other times in a person’s life when they may be vulnerable.

Perhaps, more important than age is a person’s vulnerability at any given time. They may be going through life changing experiences, illnesses, death of family members, relationship breakdown or other traumatic incidences.

According to the author of this post on who joins cults and why, there are a few factors researchers have found cult members to have in common:

No spoilers here, but my book, Borderliners, contains examples of most of the above. I’m interested in human frailty and how it is manipulated, in power and control and why, sometimes, it corrupts. Why is this? And what are the consequences?

Politics isn’t the only arena. At the heart of many religious cults you’ll also find a charismatic leader. Often it is possible to recognise you are dealing with a cult through the assumed importance of one leader who is crucial to the cult’s existence. This is a red flag. (NB. there can be political as well as religious cults, but my novel only deals with the former.)

Warning signs you are dealing with a cult

There are few other red flags, taken from this Wiki about how to avoid cults:

When I was researching Borderliners I found the sheer number of reported cults overwhelming. It seemed there were far more – everywhere – than I had ever imagined. The question I asked myself was…what does this say about humanity, what does it say about today’s world?