Under the Skin – review 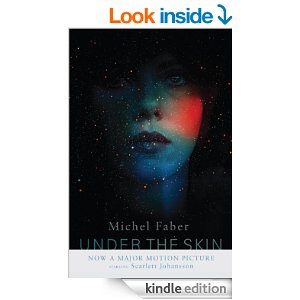 So Under the Skin – for me it raises many philosophical questions, as all good Science Fiction does. That’s the main reason I like it apart from the way it is written and the intriguing beginning, which had me hooked from page one. There wasn’t only the obvious question about meat eating/vegetarianism, but also, more important questions about identity. What makes us who we are? And what puts humans at the top of this identity tree? What if we weren’t? A few months ago I wrote a blog post on philosophy and fiction, as the novels which have had the most impact on me throughout my life, have been ones with a philosophical element.

I also found I rooted for the protagonist, even after I realised what she was, as the emotional hooks and character arc had been done so well.

I did the book in my own local book club and I was surprised, however, at how many people hated the book. I suppose this is due to the horror element within it. Normally I don’t tolerate horror, but found it a side issue in this book.

Overall, I’d give this book five stars. Ideal for lovers of speculative fiction with a literary feel.

Here’s the blurb from Amazon:

Isserley always drove straight past a hitch-hiker when she first saw him, to give herself time to size him up. She was looking for big muscles: a hunk on legs. Puny, scrawny specimens were no use to her.

So begins Michel Faber’s first novel: a lone female scouts the Scottish Highlands in search of well-proportioned men and the reader is given to expect the unfolding of some latter-day psychosexual drama. But commonplace expectation is no guide for this strange and deeply unsettling book; small details at first, then more major clues, suggest that something deeply bizarre is afoot. What are the reason’s for Isserley’s extensive surgical scarring, her thick glasses (which are just glass), her excruciating backache? Who are the solitary few who work on the farm where her cottage is located? And why are they all nervous about the arrival of someone called Amlis Vess?

The ensuing narrative is one of such cumulative, compelling strangeness that it almost defies description–the one thing that can be said with certainty is that Under The Skin is unlike anything else you have ever read. The result is a narrative of enormous imaginative and emotional coherence from a writer whose control of his medium is nearly flawless and who applies the rules of psychological realism to a fictional world that is terrifying and unearthly to the point that the reader’s identification with Isserley becomes one of absolute sympathy.

Under the Skin, available on Amazon.