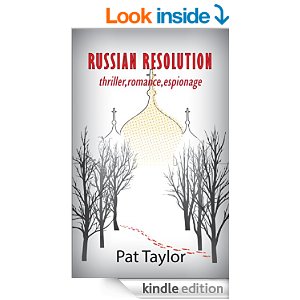 This is the kind of novel that doesn’t come round very often. Spanning several decades it takes you through the Cold War to the present day, telling an expansive story that not only thrills but provides many new insights into a mysterious and often misunderstood country.

With all the ingredients of a classic spy thriller, it turns out to be much more. Multi-layered, this is a story with depth and heart, full of intrigue and a long-running bitter-sweet romance spanning many years. There are also terrifying insights into the machinations of the Soviet authorities. Gritty history combined with numerous thrilling twists and turns makes this novel an impressive debut.

EX DIPLOMAT/SPY, JAKE, FRAMED FOR MURDER ESCAPES FROM RUSSIA, BUT RETURNS RISKING HIS LIFE TO SAVE HIS LOVER, TANYA, FROM THE CLUTCHES OF HIS KGB NEMESIS, BORIS.

During the Cold War, Jake Kilgour, a married diplomat and spy, meets Tanya, an Intourist guide in a Novgorod restaurant where she asks him to dance. He is tempted, but refuses, because he believes it is a KGB trap.

Continually drawn back to her, Jake is confused about her intentions as he is drawn deeper and deeper into the clutches of Boris a brutal KGB major, who hates Jake and lusts after Lena.

There can be only one winner out of the two suitors vying for her favours in their deadly struggle through the years from communism to capitalism.

The novel is embedded in the cultural background of Russia and its tragedies. There are many twists, turns, deaths, betrayals, and despair before the unforeseen ending.

Russian Resolution is available to purchase from Amazon