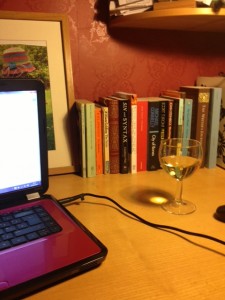 I’ve been writing all my life, but I only started looking at the business seriously in 2011, after the birth of my third and last child instigated thoughts about why I continued to delay long-held ambitions when my life seemed complete in many other areas. What was I waiting for?

On 14 February 2014 I published my first novel, Borderliners. My second and third novels, Split Symmetry and WorldCult, were published later the same year and my fourth novel, Zeitgeist, was published this year (2017).

I’m not going to lie. Ambitious plans for success in the field of novel writing are unrealistic for all but the the most determined (and, yes, I mean the most determined rather than the most gifted). However, if you tackle it in a manner akin to learning any other life skill, it becomes easier. If it takes ten years to learn a musical instrument to Grade 8 standard it will take the same to write a novel good enough to reach, touch and convince a wider audience. I’m on my fifth book now – Grade 5 standard, if you like my analogy – and the longer I write, the more I realise how much further there is to go.

How did I get this far? To find out more, take a look at all my various thoughts about writing:

Watch this space… NaNoWrMo 17 is coming up and I’ll be there. If you want to join me, let me know via my Facebook page or Twitter account.

4 Responses to About writing