10 Reasons to read a Metaphysical Thriller 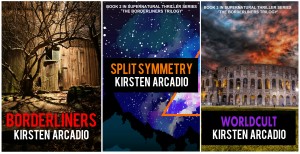 The metaphysical thriller genre could be for you…if you:

1. follow new scientific discovery in all its weird and wonderful glory
2. are impatient – a good thriller will draw you in fast
3. suspect metaphysics isn’t as far-fetched as many think
4. get excited by the idea you could be looking at real predictions of the future
5. are of the opinion dystopian thrillers are so 2012. This is better
6. think the truth is out there. Maybe you hanker for the X-files? Metaphysics is stranger than fiction
7. believed in ghosts when you were little but were told there was no such thing? Think again
8. like philosophy but find it too dry to trawl through
9. think there might be a higher meaning in the world but the old world religions don’t quite hit on it
10. have imaginary friends in a parallel universe. Maybe you didn’t imagine them after all?

All of the above apply to you? Why not try The Borderliners Trilogy?